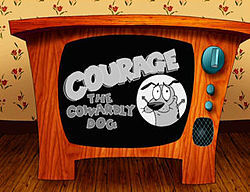 Courage the Cowardly Dog is an American animated horror comedy television series created by John R. Dilworth for Cartoon Network and the eighth of the Cartoon Cartoons. It was produced by Dilworth's animation studio, Stretch Films. The title character is an anthropomorphic dog who lives with an elderly couple in a farmhouse in the middle of "Nowhere". In each episode, the trio is thrown into bizarre, frequently disturbing, and often paranormal or supernatural-type misadventures. The series is known for its dark, surreal humor and atmosphere.

Courage is a timid pink dog with paranoia problems. His owners are an old couple living on a farm full of bizarre adversaries. Courage must overcome his fear and help save his owners, Eustace and Muriel, from ghosts and paranormal spirits living on the farm. Although Muriel loves Courage, Eustace loves to tease him and scare him.

Retrieved from "https://boomerangstory.fandom.com/wiki/Courage_the_Cowardly_Dog?oldid=1605"
Community content is available under CC-BY-SA unless otherwise noted.