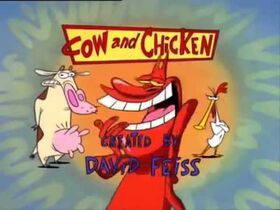 Cow and Chicken is an American animated comedy television series created by David Feiss for Cartoon Network, and the third of the network's Cartoon Cartoons. It follows the surreal adventures of two funny animal siblings, Cow and Chicken. They are often antagonized by the Red Guy, a cartoon Devil who poses as various characters to scam them.

A scrawny, 11-year-old chicken named Chicken reluctantly watches out for his beefy "little" sister, a 7-year-old cow named Cow. The unconventional offspring of two human parents, the two young animals navigate their way through suburbia, encountering problems not only at school, but with the devilish schemes of the Red Guy, a crimson-colored antagonist of many guises whose singular intent is to make the siblings' lives miserable. If the character design and offbeat humor of "Cow and Chicken" cause viewers to recall "The Ren & Stimpy Show" and "The Shnookums & Meat Funny Cartoon Show there's a good reason: creator David Feiss worked on that irreverent animated series as well.

Retrieved from "https://boomerangstory.fandom.com/wiki/Cow_and_Chicken?oldid=1641"
Community content is available under CC-BY-SA unless otherwise noted.