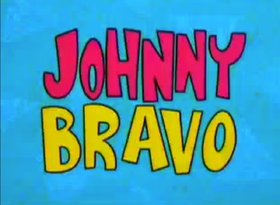 Johnny Bravo is an American animated television series created by Van Partible for Cartoon Network, and the second of the network's Cartoon Cartoons, which aired from July 14, 1997, to August 27, 2004. The series centers on the title character, who is loosely based on Elvis Presley. Johnny Bravo is a sunglasses-wearing, muscular young man who lives with his mother and attempts to get women to date him, though he is usually unsuccessful. He ends up in bizarre situations and predicaments, often accompanied by celebrity guest characters such as Donny Osmond or Adam West. Throughout its run, the show was known for its adult humor and pop culture references.

Johnny Bravo has no shortage of confidence, and he's certain that all women want him. With his big hair and tight black clothes, he's known for his karate chops, accompanied by the sound of a bullwhip.

Retrieved from "https://boomerangstory.fandom.com/wiki/Johnny_Bravo?oldid=1600"
Community content is available under CC-BY-SA unless otherwise noted.