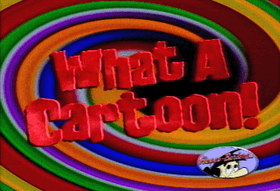 'What a Cartoon!' (later known as The What a Cartoon! Show and The Cartoon Cartoon Show) is an American animated anthology series created by Fred Seibert for Cartoon Network. The shorts were produced by Hanna-Barbera Productions; by the end of the run, a Cartoon Network Studios production tag was added to some shorts to signal they were original to the network. The project consisted of 48 short cartoons, intended to return creative power to animators and artists, by recreating the atmospheres that spawned the iconic cartoon characters of the mid-20th century. Each of the shorts mirrored the structure of a theatrical cartoon, with each film being based on an original storyboard drawn and written by its artist or creator.

The series first aired on February 20, 1995, and the shorts were promoted as World Premiere Toons. During the original run of the shorts, the series was retitled to The What a Cartoon! Show and later to The Cartoon Cartoon Show until the final shorts aired on August 23, 2002. The project served as the launching point for multiple Cartoon Network animated television series, including The Powerpuff Girls, Dexter's Laboratory, Johnny Bravo, Cow and Chicken, Courage the Cowardly Dog, Mike, Lu & Og, Sheep in the Big City, Whatever Happened to... Robot Jones?, Codename: Kids Next Door, Grim & Evil, and Megas XLR, as well as Fox’s Family Guy.

Retrieved from "https://boomerangstory.fandom.com/wiki/What_a_Cartoon!?oldid=664"
Community content is available under CC-BY-SA unless otherwise noted.